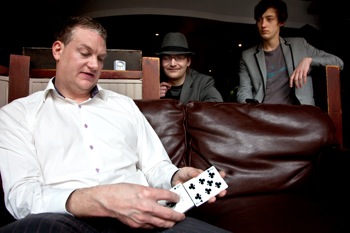 So this week Tuesday 6th April 2010 – didn‘t have a booking, so I decided to beat a Guinness World Record, I applied to break the record back in september.
I heard about the previous record achieved at the Magic Castle in Hollywood by John Walton in August 2009 was 2,784 ‘Faro’ shuffles in 12 hours.

I kicked this well and truly into touch, starting my attempt at 9am and completing 2,784 ‘Faro’ shuffles in just 7 hours 10 minutes and 15 seconds. I then went on to complete 2,904 shuffles before taking a break at 4.35pm. On resuming the session at 5.15, I raised the record to 3,200 shuffles, at which point I stopped at 6.15pm having well and truly become the new world record holder.

I achieved the largest number of consecutive, perfect ‘Faro’ shuffles in the world at Illusions Magic Bar in Bristol., used just one deck of Bicycle cards from United States Playing Card Company, bought locally.
One mistake of one card in any one shuffle, at any time, would have invalidated the whole record attempt.

In a perfect Faro shuffle, the deck is split into equal halves of 26 cards which are then pushed together so they interweave perfectly.
When eight perfect Faro shuffles are performed in a row, then the deck of 52 cards will be restored to the original order. This counts as one cycle.

The record-breaking session was witnessed, photographed and videoed. Guinness World Records has been formally notified and is expected to adjudicate the record within 6 weeks.

I hope to set an even bigger World Record in the future going flat out for the full 12 hours, so if you know any Las Vegas hotels that have a nice comfortable chair.

“It was fascinating to read about your world record in Faro shuffles in Mel Keintz’ email today. I’ve just retired from performing a 60 year career in magic and show business, and have had some nice successes in the magic world. But I was never able to do even one perfect Faro Shuffle. So your accomplishment just blew me away. My Stetson’s off to you. Congratulations.”Walter Zaney Blaney   From Texas USA