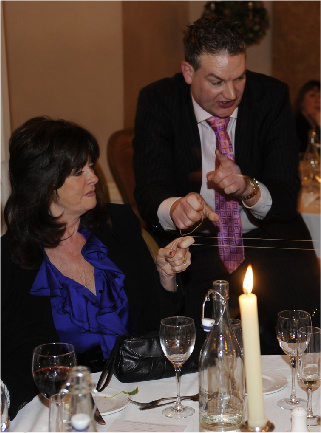 Everyone enjoys seeing a magic trick. Whether you believe it’s really magic or just a trick of the eye is up to you. But one thing is for certain: a good magic trick will spark conversation and will be talked about long after the trick is finished. This is particularly true of close up magicians. Rather than performing on a stage, removed from the audience, a close up magician is right next to you. Because this magic is happening literally right before your eyes, the sense of awe and wonder such a magic trick produces is amplified by the intimacy of the setting.

Close up magicians work in several different ways. They can mingle in a crowd, engaging different groups on people in banter as they perform. They can also move methodically from table to table, performing tricks up close for every table so that no one is missing out. They can also work with a small group at a small party. You don’t need to have a full convention going on in order to justify hiring a magician. And in all of these scenarios, people are sure to be delighted and entertained by the tricks that the magicians perform.

One of the best things about close up magicians is that the spectators are close enough to see for themselves that there are no wires or gimmicks involved. These magicians often work with props borrowed from the spectators themselves, further proving that their magic doesn’t require special equipment in order to perform. Somehow, knowing that there’s no machinery or gadgets involved heightens the sense of mystery surrounding a trick. When it’s just a man with a coin from your own pocket, then the magician’s act becomes more about his skill than about his props.

While some people prefer watching more spectacular tricks performed on a stage, there’s no experience that compares to the intimacy of watching a man performing a magic trick right in front of you, where the slightest mistake could give you a glimpse at the man behind the curtain. You don’t need to be a child in order to appreciate magic. But when you see a magician ply his trade, you’re sure to feel like a kid again. The childlike wonder that you feel while you watch close up magicians doing the impossible is an unforgettable sensation.