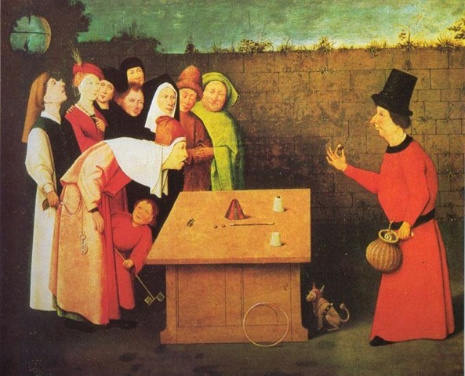 Magic, while it has a fairly mysterious past, is known today as the art of performing illusions meant to entertain, amaze, and baffle an audience. Practitioners of this art are known as illusionists, conjurors, prestidigitators, or most commonly magicians. The profession of the magician as a respectable career came about in the 1800s. During this time, magicians performed all kinds of tricks to captivated audiences such as making inanimate objects appear to move of their own accord, causing people to disappear, and pulling objects seemingly out of thin air. In all of these cases, magic was performed on a stage where the perspective of the audience could be exploited to make the illusions look convincing, at least from a frontal view.

In the past, some magicians claimed to have supernatural powers (Uri Geller). Today however there is a general understanding between performers and audience members. This unspoken agreement states that the audience understands that techniques like misdirection, sleight of hand, deception, mirrors, secret mechanisms in machines and other forms of trickery are used to create a safe though impressive illusion. There are seven different recognised forms of illusion that are utilised by magicians today. These are known as production, vanishing, transformation, restoration, teleportation, penetration, levitation, and secrecy. Without this final element in the trickery, the illusion would lose its appeal for audiences.

There are three different broad categories of magic performed today. The first is known as stage magic. This is the form that allowed magic to gain popularity in the early days. It involves a magician standing on stage and performing in front of a large audience. Platform magic is similar, but generally fewer people are watching than with stage magic. The most intimate form of magic performed is called close up magic. The audience could literally be surrounding the magician and he would still perform his trick. Audience involvement in the trick is essential for this form of magic.

The techniques that magicians utilise to make their trickery possible take a great deal of practice to master especially in close up magic where the audience can see the trick performed from many angles. The earliest forms of magic must be attributed to Jean Eugène Robert-Houdin, followed shortly by Harry Houdini who took his stage name from Robert-Houdin. Some famous magicians of today include James Randi, Penn and Teller, David Blaine and Derren Brown. Many techniques used today have survived the centuries despite the changes seen in other aspects of civilisation.

2011 started off great with a couple of magic series, Penn and Teller Fool Us and the BBCs The Magicians even though hosted by Lenny Henry, I hope this encourages you to book a close up magician for your wedding or party.